As Christy Smith gains momentum in the final days leading up to the May 12 special election in California’s 25th Congressional District, Donald Trump is once again resorting to his usual tactics of spreading lies and disinformation in a desperate attempt to deceive voters about Smith’s record and boost anti-choice Republican extremist Mike Garcia.

Smith — who in the last week has earned the endorsements of Democratic heavyweights including Elizabeth Warren, Hillary Clinton, Amy Klobuchar, and the Congressional Black Caucus PAC — released a new campaign ad yesterday criticizing Trump’s botched handling of the COVID-19 pandemic and calling out Garcia’s blind loyalty to the President and his extreme agenda.

The ad clearly struck a chord with Trump, who soon after began promoting falsehoods about Smith’s record.

As NARAL Pro-Choice America President Ilyse Hogue pointed out in a tweet last night: “Strong women are Trump’s kryptonite” — so it was no surprise to see a threatened Trump respond to Smith’s growing momentum with a move pulled straight from the GOP playbook of weaponizing disinformation.

Despite Trump’s efforts to misrepresent Smith’s record, the recent endorsements of Smith have emphasized her commitment to public service:

“I am proud to endorse Christy Smith because whether it was serving on the local PTA, school board, or in the state house, Christy has always stepped up…Now more than ever, we need fighters like Christy in Congress working to lower the cost of prescription drugs, make healthcare more affordable, provide American workers access to paid sick leave, and ensure the needs of families come first. I’m honored to stand shoulder to shoulder with her in this fight.” — Elizabeth Warren 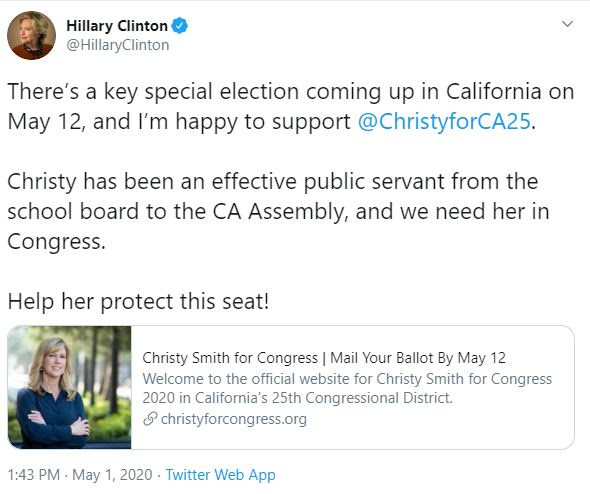 We fight for a future that includes access to all reproductive health care no matter your zip code or employer. California must lead the charge. Are you with us?

By taking this action you are affirming your membership in NARAL Pro-Choice America. What's this?